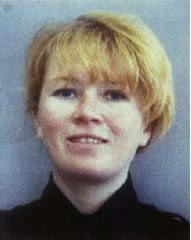 I was one of the last people to see Police Officer Moira Smith before she perished in the collapse of the World Trade Center. I remember her very vividly because my experience was personal, intense, and unique. This is to document what she was doing in those final minutes.

I have to background this story by saying that my wife has been a flight attendant for a major US Airline for over twenty years. During that time, she has received extensive training in emergency evacuation procedures. I have seen her practice the drill for evacuating passengers from a fiery aircraft on many occasions. I always felt that she was very sincere about executing her responsibility in such a situation. Her rehearsals includeded details that would never occur to the average person. For example, she was trained to touch a door with the back of her hand before opening it. If the door was so hot that it burned her hand, she would still be able to use the front of her hand to hold a rope should that be necessary. The dedication and intensity with which she executed these exercises left me no doubt about her intention to perform in an emergency situation.

On 9/11, I entered 2 WTC moments before the first tower was struck. I took the express elevator to the 78th floor sky lobby and everything appeared normal. I entered the local elevator and pressed 84. The elevator stopped on the 82nd floor and a young man leapt into the car just as the door was closing. He was screaming, "Terrorists, go down" I asked him what he had seen, but he was in such a state of shock he couldn't communicate. He was crouched in the corner and kept saying, "Fire! Fire"

The elevator continued up to my floor but I didn't get out. I kept trying to find out what the young man had seen. When we got back down to the sky lobby, the scene has changed completely. The floor was packed, and people were lined up ten deep in front of the express elevators to go back down. We weren't sure if the elevators were going to be running, so many of us started down the stairs.

At first, it was a slow march. There were people streaming into the descending crowd on every floor. However, when we had gone down about ten floors, the flow of people joining us stopped. I though that perhaps the situation had clarified, and I decided to view the scene for myself.

The first reentry door was on the sixtieth floor. I asked a fellow who was walking around locking up offices where I could go to see the North Tower. He pointed down a hallway and said, "It's that way, but don't look. It's too horrible!"

I went anyway. When I got to the window, I looked up and saw the flames shooting out of the top floors. I looked down and saw three distinct large pools of blood. I reckon the largest was thirty yards across. The bodies were mixed in with the wreckage and I could make out several legs sticking out of the debris. I looked back up just to see a man in a white shirt jumping from a top floor. I saw his face clearly. My eyes followed him down till the ground came into focus, then I looked away.

My reaction was very physical and intense. My stomach turned, my knees became wobbly, and my eyes saw black. I almost passed out.

I thought that by exiting the building under these circumstances I would add to the confusion and impede the rescue workers. I decided to sit down and wait for the emergency to get under control. I had been sitting for about 15 minutes, when the second plane hit our building. We knew something enormous had happened because the building shook and the temperature rose by ten degrees in an instant.

There were about ten of us who had been sitting around in the reception area on that floor. We all got up quickly and hurried down the steps. The staircase was open now and we were moving quite fast.

After we had gone down several floors, we came to a cripple woman lying on a landing between floors. Her walking cane was by her side and she was looking at the people hurrying by. She was yelling, "I'm going to die. I'm going to die." I felt a pang of guilt as I continued past her with the rest of the crowd. My mind flashed images of my wife alone in the bed and my sons without a father. Nothing else mattered, I had to get out.

When we got down to about the fifth floor, we caught up with the tail end of the main crowd. The trek down the steps became a slow march again. I looked back to see who was behind us. There I saw an Oriental fellow carrying the crippled woman on his back.

I didn't fault myself for being a coward. Rather, I admired him for being calm and composed in this emergency situation. I thought, I could have done that too - or at least I could have helped out - but I'm not thinking I'm panicked". As we stood there in the dimly lit staircase, I was thinking about the carnage I would witness when we came out into the plaza lobby. I was trying to brace myself. To be prepared for the worst.

We exited the stairwell to a ramp which led toward the main plaza. A slow moving line progressed along the ramp to a down escalator which connected to the underground passageway being used to exit the compound. Moira stood at the end of the ramp directing the traffic down the escalator. She had her flashlight in her right hand and she was waving it like a baton. She was repeating over and over- "Don't look! Keep Moving."

I immediately had the sensation that I knew what had happened there before. I thought: groups of people had come through here and stopped to look at the horror of the situation. There mass hysteria and the exit paths were blocked. She broke it up and got things moving again. Now she's making sure it doesn't happen again.

It was a very intense personal experience for me. It was like I was in a scene that I had witnessed before only this time - instead of my wife rescuing strangers - it was me being rescued by Moira.

I came to the end of the ramp and I was standing squarely in front of Moira, I leaned to the left to try look past her to see the plaza. She quickly matched my motion and blocked my vision saying "don't look." Our eyes made direct contact. My eyes said to her, "I know how bad it is and I understand what you're doing." Her face was full of pain and her eyes said to me, "In this horrific situation, this is the best and only thing I can do.

The mass of people exiting the building felt the calm assurance that they were being directed by someone in authority who was in control of the situation. Her actions even seemed ordinary, even commonplace. She insulated the evacuees from the awareness of the dangerous situation they were in, with the result that everything preceded smoothly.

In my company - sixty one people perished - one hundred eighty survived. Afterwards, I asked several of my fellow employees if they had noticed the woman police officer at the escalator landing. They said, "Yeah - she was directing traffic."

A statue of Moira holding her flashlight while evacuating the building - would be an excellent way to pay tribute to the heroism of the NYPD on 9/11. As a work of art, it would work on many levels.

This account was written by me - Martin Glynn. I can be contacted at: